A Hindu temple design follows a geometrical design called vastu-purusha-mandala. The name is a composite Sanskrit word with three of the most important components of the plan. Mandala means circle, Purusha is universal essence at the core of Hindu tradition, while Vastu means the dwelling structure. Vastupurushamandala is a yantra. The design lays out a Hindu temple in a symmetrical, self-repeating structure derived from central beliefs, myths, cardinality and mathematical principles.

The 8x8 (64) grid Manduka Hindu Temple Floor Plan, according to Vastupurusamandala. The 64 grid is the most sacred and common Hindu temple template. The bright saffron center, where diagonals intersect above, represents the Purusha of Hindu philosophy.

The 8x8 (64) grid Manduka Hindu Temple Floor Plan, according to Vastupurusamandala. The 64 grid is the most sacred and common Hindu temple template. The bright saffron center, where diagonals intersect above, represents the Purusha of Hindu philosophy.

The four cardinal directions help create the axis of a Hindu temple, around which is formed a perfect square in the space available. The circle of mandala circumscribes the square. The square is considered divine for its perfection and as a symbolic product of knowledge and human thought, while circle is considered earthly, human and observed in everyday life (moon, sun, horizon, water drop, rainbow). Each supports the other. The square is divided into perfect square grids. In large temples, this is often a 8x8 or 64 grid structure. In ceremonial temple superstructures, this is an 81 sub-square grid. The squares are called ‘‘padas’’. The square is symbolic and has Vedic origins from fire altar, Agni. The alignment along cardinal direction, similarly is an extension of Vedic rituals of three fires. This symbolism is also found among Greek and other ancient civilizations, through the gnomon. In Hindu temple manuals, design plans are described with 1, 4, 9, 16, 25, 36, 49, 64, 81 up to 1024 squares; 1 pada is considered the simplest plan, as a seat for a hermit or devotee to sit and meditate on, do yoga, or make offerings with Vedic fire in front. The second design of 4 padas has a symbolic central core at the diagonal intersection, and is also a meditative layout. The 9 pada design has a sacred surrounded center, and is the template for the smallest temple. Older Hindu temple vastumandalas may use the 9 through 49 pada series, but 64 is considered the most sacred geometric grid in Hindu temples. It is also called Manduka, Bhekapada or Ajira in various ancient Sanskrit texts. Each pada is conceptually assigned to a symbolic element, sometimes in the form of a deity or to a spirit or apasara. The central square(s) of the 64 is dedicated to the Brahman (not to be confused with Brahmin), and are called Brahma padas.

In a Hindu temple’s structure of symmetry and concentric squares, each concentric layer has significance. The outermost layer, Paisachika padas, signify aspects of Asuras and evil; the next inner concentric layer is Manusha padas signifying human life; while Devika padas signify aspects of Devas and good. The Manusha padas typically houses the ambulatory. The devotees, as they walk around in clockwise fashion through this ambulatory to complete Parikrama (or Pradakshina), walk between good on inner side and evil on the outer side. In smaller temples, the Paisachika pada is not part of the temple superstructure, but may be on the boundary of the temple or just symbolically represented.

The Paisachika padas, Manusha padas and Devika padas surround Brahma padas, which signifies creative energy and serves as the location for temple’s primary idol for darsana. Finally at the very center of Brahma padas is Garbhagruha(Garbha- Centre, gruha- house; literally the center of the house) (Purusa Space), signifying Universal Principle present in everything and everyone. The spire of a Hindu temple, called Shikhara in north India and Vimana in south India, is perfectly aligned above the Brahma pada(s).


A Hindu temple has a Shikhara (Vimana or Spire) that rises symmetrically above the central core of the temple. These spires come in many designs and shapes, but they all have mathematical precision and geometric symbolism. One of the common principles found in Hindu temple spires is circles and turning-squares theme (left), and a concentric layering design (right) that flows from one to the other as it rises towards the sky.

Beneath the mandala's central square(s) is the space for the formless shapeless all pervasive all connecting Universal Spirit, the Purusha. This space is sometimes referred to as garbha-griya (literally womb house) - a small, perfect square, windowless, enclosed space without ornamentation that represents universal essence. In or near this space is typically a murti (idol). This is the main deity idol, and this varies with each temple. Often it is this idol that gives it a local name, such as Visnu temple, Krishna temple, Rama temple, Narayana temple, Siva temple, Lakshmi temple, Ganesha temple, Durga temple, Hanuman temple, Surya temple, and others. It is this garbha-griya which devotees seek for ‘‘darsana’’ (literally, a sight of knowledge, or vision). 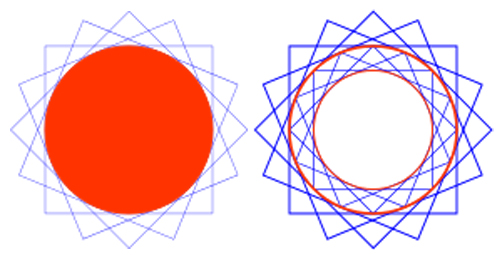 A Hindu temple has a Shikhara (Vimana or Spire) that rises symmetrically above the central core of the temple. These spires come in many designs and shapes, but they all have mathematical precision and geometric symbolism. One of the common principles found in Hindu temple spires is circles and turning-squares theme (left), and a concentric layering design (right) that flows from one to the other as it rises towards the sky. 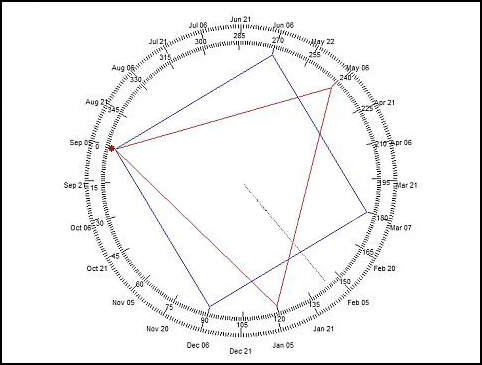 Above the vastu-purusha-mandala is a superstructure with a dome called Shikhara in north India, and Vimana in south India, that stretches towards the sky. Sometimes, in makeshift temples, the dome may be replaced with symbolic bamboo with few leaves at the top. The vertical dimension's cupola or dome is designed as a pyramid, conical or other mountain-like shape, once again using principle of concentric circles and squares (see below). Scholars suggest that this shape is inspired by cosmic mountain of Meru or Himalayan Kailasa, the abode of gods according to Vedic mythology. In larger temples, the outer three padas are visually decorated with carvings, paintings or images meant to inspire the devotee. In some temples, these images or wall reliefs may be stories from Hindu Epics, in others they may be Vedic tales about right and wrong or virtues and vice, in some they may be idols of minor or regional deities. The pillars, walls and ceilings typically also have highly ornate carvings or images of the four just and necessary pursuits of life - kama, artha, dharma and moksa. This walk around is called pradakshina.

An illustration of Hindu temple Spires (Shikhara, Vimana) built using concentric circle and rotating-squares principle. The left is from Vijayanagar in Karnataka, the right is from Pushkar in Rajasthan.
Large temples also have pillared halls called mandapa. One on the east side, serves as the waiting room for pilgrims and devotees. The mandapa may be a separate structure in older temples, but in newer temples this space is integrated into the temple superstructure. Mega temple sites have a main temple surrounded by smaller temples and shrines, but these are still arranged by principles of symmetry, grids and mathematical precision. An important principle found in the layout of Hindu temples is mirroring and repeating fractal-like design structure, each unique yet also repeating the central common principle, one which Susan Lewandowski refers to as “an organism of repeating cells”.

Exceptions to the square grid principle
Predominant number of Hindu temples exhibit the perfect square grid principle. However, there are some exceptions. For example, the Teli-ka-mandir in Gwalior, built in the 8th century CE is not a square but is a rectangle in 2:3 proportion. Further, the temple explores a number of structures and shrines in 1:1, 1:2, 1:3, 2:5, 3:5 and 4:5 ratios. These ratios are exact, suggesting the architect intended to use these harmonic ratios, and the rectangle pattern was not a mistake, nor an arbitrary approximation. Other examples of non-square harmonic ratios are found at Naresar temple site of Madhya Pradesh and Nakti-Mata temple near Jaipur, Rajasthan. Michael Meister suggests that these exceptions mean the ancient Sanskrit manuals for temple building were guidelines, and Hinduism permitted its artisans flexibility in expression and aesthetic independence.